This mission complements our previous mission, "To Teach as Jesus Did". This is a call to our staff, parents and community as to how we are to teach. The goal of our teaching is expressed in the new mission statement. Thus, as we strive "To Teach as Jesus Did", our goal is "Instilling Catholic values and promoting academic excellence by nurturing mind, body and soul."

The Aberdeen Catholic School System is accredited by the state of South Dakota. This accreditation confirms the school system is in compliance with state laws and administrative rules, and has in place a comprehensive plan that promotes sound educational practices for the purpose of continuous improvement.

The Aberdeen Catholic School is also accredited by the AdvancedEd Association. This voluntary Accreditation was developed more than 100 years ago by American universities and secondary schools. Accreditation engages the school community in meeting high quality standards, implementing a continuous improvement process, and engaging in quality assurance through an internal and external review.

Catholic education has served Aberdeen for nearly 125 years.  The first Catholic school was established inside Sacred Heart Church in 1886, and a freestanding school was built a few years later. St. Mary's and Sacred Heart parishes each built elementary school buildings, serving grades 1 through 8, in 1912 and 1913 respectively. The Benedictine and Presentation Sisters were the primary teachers in the schools for many decades.

In 1980, the Aberdeen Catholic School System was consolidated and Sacred Heart and St. Mary's Schools were renamed Roncalli. Kindergarten was also added to the educational program. In 1988-89 school year, the Roncalli Sonshine Patch Preschool/Daycare Program was created. In 2002-2004, ACSS demolished its elementary buildings and built Roncalli Primary School (preK-2) and Roncalli Elementary School (3-6).

Roncalli is Pope John XXIII's family name. Elected Pope on October 28, 1958, he was to be only an "interim" pope; however, he captured the entire world's imagination and changed millions' hearts in a short space of time. Pope John XXIII changed modern Christianity by summoning the Second Vatican Council to deal specifically with the question of Christian unity. Under his leadership, the church made many sweeping changes to help meet modern times' challenges. In 1964, the name selection committee felt that the new high school, Roncalli, should be dedicated to the same objective as Pope John XXIII, by assisting the Catholic students of Aberdeen in meeting the challenge of the modern time... educationally, socially, and spiritually.

Learn more about our history and faith > 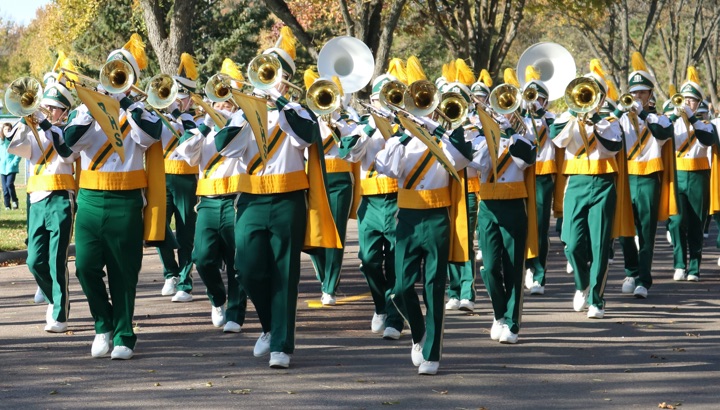 Roncalli High is our cry
It is our call to fame.
On field and courts we battle,
we work for victory in every game.
Roncalli High the Green and Gold
carrying our banners forth,
with honor and glory we'll
fight, fight, fight
to win and reach our goal.
C-A-V-A-L-I-E-R-S
Cavaliers, Cavaliers, RHS!
Listen to the School Song